Homepage
I have danced and performed all my life, and from many cultural perspectives.
In 1970’s I studied, performed and taught with Dance Concert, led by Margaret Walker and visiting traditional dance specialists from overseas and indigenous Australia.  During the same period I worked with New Dance Theatre and Ruth Galene in contemporary and expressive dance.  From that time, the two streams, ethnic/traditional and contemporary/expressive, have formed part of my dance journey.
During the same period a family tour to Java (Indonesia), where my father grew up, triggered an interest in the myth, rites and rituals of other cultures.  This interest has been fed by visits to Bali, Thailand, Northern India and Ghana, West Africa, and supported by reading and research.
I began performing in the context of the ‘sacred’ with Harvest Theatre in 1973, directed by musician-composer, Jeff Carroll.

Then, after a ten year break I returned to performance in 1985 and joined Prepare, led by Mary Jones.  For five years we visited and performed in churches of many Christian denominations.

It was a wonderful time, and the blending of my beliefs and artistic practice.  As well as freelance teaching and tutoring in schools and universities, I began choreographing, performing and teaching for a number of Christian organizations and contexts.
One of the other dancers, Sue Spence, and I had a dream to form a contemporary dance theatre-based company to create more abstract works.  In 1987 Double Vision (from William Blake, ‘For double the vision my Eyes do see, And a double vision is always with me’) held its first public performance with Song In a Strange Land, to music composed by Alister Spence.  We ended up taking our second program, Images of the Heart to the Adelaide Festival Fringe in 1990.  It was actually two programs, the second being a play with dance, O’ Ecclesia,’ on the life of Hildegard of Bingen, written collaboratively by Pat Lewis and Jolyon Bromley.  The company continued in various incarnations until 1994. 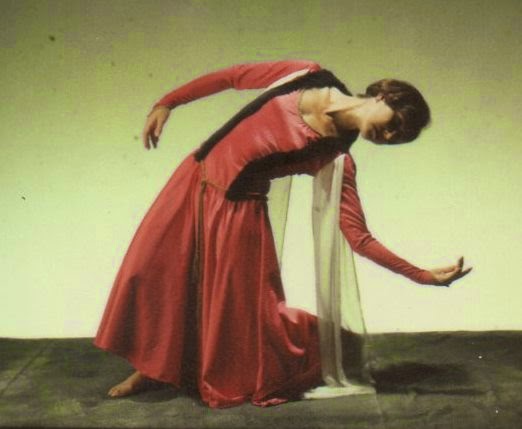 By the 1990’s I was increasingly working solo, collaborating with other artists, and exploring text and drama.  The performances gradually took on the form of a ritual as I began to search for a means to explore, process and express the intersection of my changing life experiences and spirituality.  By 1994 I was calling these events performance-rituals. The major works included Into the Dark (1993), Dark Fire (1994), 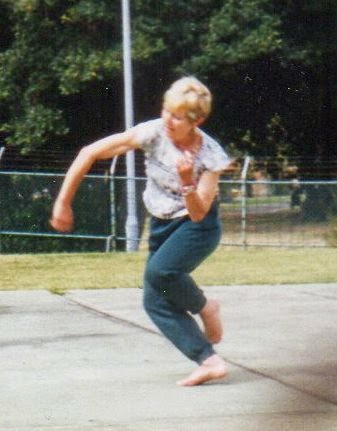 For Eve (1995) and Fallen Totems (1997).  The culmination of this journey was a series of five events as part of Phd, with the overall title Centre of the Storm (1998-2000): Centre of the Storm; Beginnings; Sense of Place, Sacred Space - Arrival; The Fire of the Sun – Survival; and Passage.  The thesis title, In Search of an Australian Feminist Spirituality through Performance-Ritual more-or-less describes the content – a search through my religious and family history from North-Western Europe to Australia.

The thesis can be found at http://handle.uws.edu.au:8081/1959.7/771 or http://arrow.uws.edu.au:8080/vital/access/manager/Repository/uws:771
Just prior to entry into the doctoral program in 1997, I became involved in West-African style drumming and dance, and after completing Phd some friends asked me to teach.  By 2005, with some of my longterm students, I formed the drum ‘n dance group Doonchicks, and we performed at numerous festivals and special events.  I did wonder how this ‘fitted in’ to my spiritual-performance journey, but soon realised what a celebration of, and thanksgiving for, life it is, hence Drum, Dance ‘n Celebration.  Doonchicks continued for six years before disbanding.   I now continue to teach and perform freelance, sometimes joined by another drummer as Dr A and Mama Doon.  For more information: http://annettemaie.blogspot.com.au/

About two and a half years ago I began Tai Chi and Qi Gong, in a way a homecoming to contemporary dance.  This cycle has completed and I’m not sure what, or when, the next will be.
Homepage