Why do we create 'sacred'?

What is it we seek when we create sacred?  What are we attempting to do or experience?  Is it just a pragmatic, conscious attempt to honour life, or are we simultaneously desiring to experience, or hoping for communication with, the source of life...and how do we know when this occurs?

After my return to the city I was motivated to find opportunities and spaces in the city environment where I could create and imprint ‘sacred’ as I had done while living in the mountains.  However it did not seem to want to happen.  Finally, in 2012 I went to a local park and took a few hesitant steps.  It seemed to work.  The sun shone, the birds sang, and it felt ‘right’.  A little more confident, I began to search for another suitable area the following year and found, what I considered to be, a potentially ‘perfect’ sacred site (below). 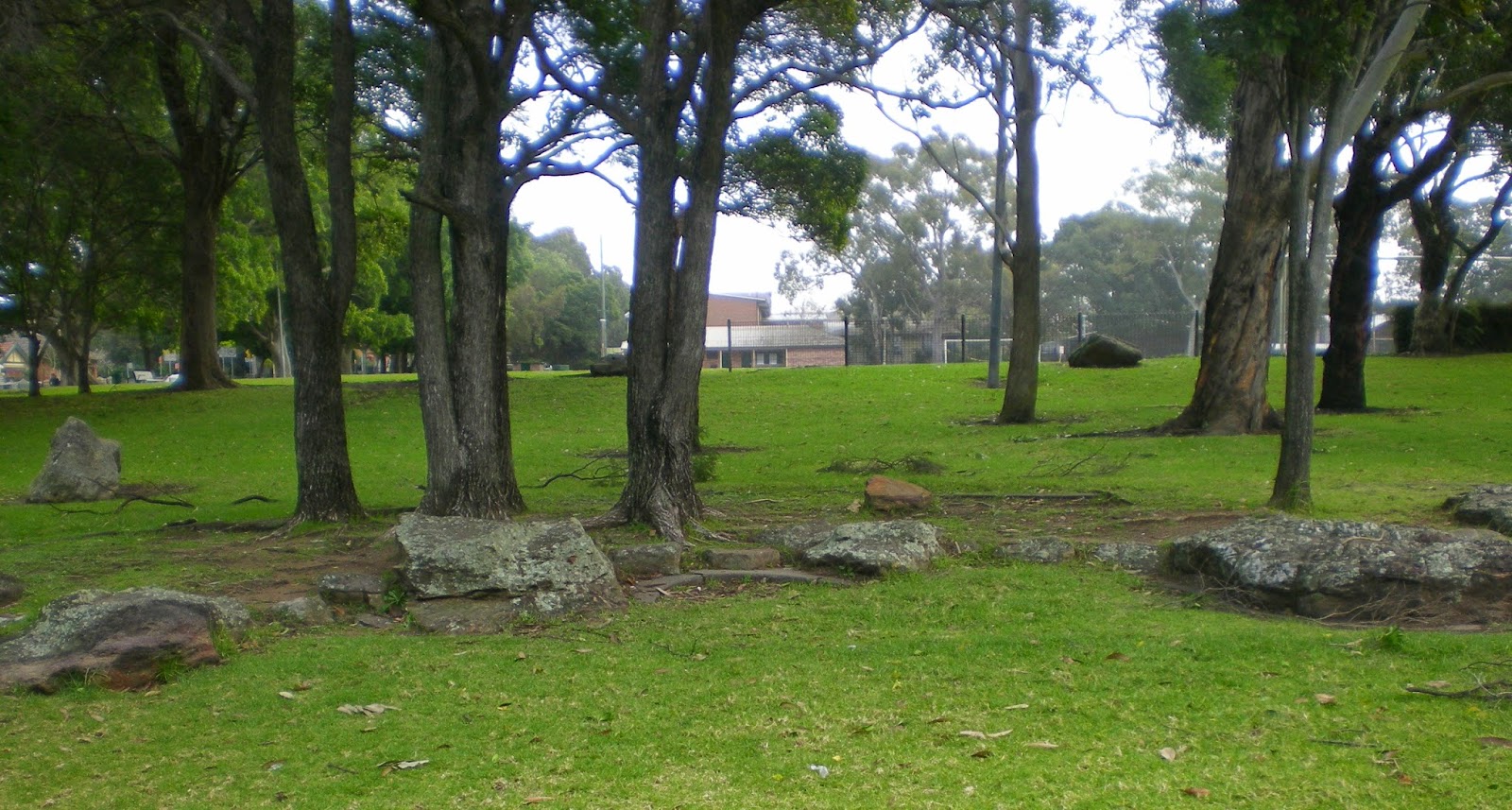 When I returned sometime later to prepare I found that the ground was scattered with needles.  I had been aware that the area was used by locals for the weekend Bocce (an Italian bowling game), and had seen their bags hanging from the trees and clothing scattered over the rocks.  But the needles were something else.  It made me question what I was trying to do, and in the end I did not follow through.  This year I noticed that the area was cordoned off and an upgrade was in progress.  The park is now being transformed into a leash-free area for dogs.   Already owners and their dogs are using the park, while other locals are relaxing on the grass and enjoying ‘time out’.

The park with its circle of trees and rocks continues yet the area has obviously served a number of different functions.  It hasn’t changed, but the people who have used it have viewed its potential with different eyes.  The common thread, however, is that all of us, the drug users, the Bocce players, the dog owners, other locals and me, have all been drawn there.  It does offer a refuge away from the direct view of the traffic and of the neighbouring sports park...a time out...an opportunity to withdraw from the distractions of daily life...perhaps also a time to reflect, or a time to enjoy the experience of just being...and for some, to indulge in the euphoria of non-being.

After all, this is what our sacred spaces, churches, temples and rituals create for us.  They create a place already set up, where we are preconditioned to expect and experience a sense of withdrawal, calm and reflection.  Where these sanctioned sacred places differ is that we usually take the next step of inviting or opening up to ‘other’/god/dess.  We prepare our minds and bodies so that we are receptive for communication.

Research into how the brain functions in these circumstances has been undertaken by a number of neuroscientists.  Andrew Newburg has used measurements of the changes in blood flow to indicate increased and decreased activity.  In his research whereas a number of different parts of the brain are seen to be active in subjects engaged in prayer and meditation, the common element seems to be a disengagement of the area which orientates us in space and time.  This disengagement is common across Buddhist meditation, atheist meditation and Christian prayer.  There is a sense of an eternal present.  Obviously other parts of the brain must be active to allow us to recognise, read and interpret this sensation.  Similar research is being undertaken on people engaged in artistic pursuits.

Using fMRI scans, researchers in Neuroplasticity are exploring how the brain can be educated to be receptive to certain types of experiences, including different types of meditation, and in the process can change itself. My interpretation of the research is that meditative practices seem to allow the brain to more easily communicate with itself, set up transient networks to help order information, focus on more than one task, and screen out distractive ‘noise’.

Educators are well aware that the brain teaches itself.   That is how we learn.  To take this a step further, we could say one part of the brain teaches another part about our reality, including our spiritual reality.  Similarly the brain is able to create new and imagined realities.  In the art world this was once called ‘creativity’;  the inner ideas and images pool used by writers, choreographers, visual artists and composers, etcetera.

What this also suggests is that the brain is able to view the world through whatever lens it decides to employ and is able to change the lens if it doesn’t work, or at will, and find a more suitable alternative.  I remember a religious leader speaking about guarding the ‘heart’ against doubt and questions.  In light of current research it would be more accurate to speak about guarding the brain against itself if we do not wish change to occur or evolution to take place, that is, to remain ‘close-minded’.

If the brain is able to view the world through whatever lens it decides to employ, and is able change lens at will, once the brain decides to become more open to alternative experiences, ways of living and ways of believing, it gives itself permission to view and question ideas and experiences from multiple perspectives. This process explains, in part, the impact the feminist movement and theory had on many women's lives and beliefs.  It also allows us to hope for cross-cultural and cross-religious understanding and harmony, addressed in my previous blog.

Therapists have long known the value of encouraging their clients to shift their self-and-world-view and create a more appropriate lens for themselves; one which will assist them to live positively in the reality of their daily life.  Motivational life and business speakers have also incorporated this idea, directed towards achieving greater work-related and financial success.  It seems that one of the current trend is TEDx, described by its promoter, ‘the idea with TEDx is that you change your perceptions...It’s about starting from a new base to make a better world’ (Inner West Courier, August 26 2014, p. 30)

While brain research can describe to us how the brain functions during religious and creative experiences, it cannot prove if a god/dess does or does not exist, nor how much our spiritual and sacred experiences are real or imagined.  What some of the research does support is that sacred practices, such as religious prayer, meditation, ritual, as well as engagement in the arts, can move us into feeling a sense of no place, no time, and release tension and stress.  This is something practitioners have long known through experience.[i]

So what does this mean for our sacred experiences:  those surges of energy that seem to come, or those times of synchronicity when time, space and nature seem to be in harmony, and support or take part in our rituals and performances?  Are we just allowing ourselves to see and experience ordinary events through different eyes, or is there something more?  Unfortunately these are the questions that science cannot yet answer, though not for want of trying.  Science has certainly moved beyond certainty, and towards complexity, chaos, self-organising systems, time-no-time, space-no-space, empty-is-not-empty, false-vacuum-true-vacuum, parallel universes, and something(s) scientists cannot quite put their finger on but suspect is(are) there. [ii]

What we do know is that life is a question and an answer, and humans are an integral part of, and play a vital role in, creating and adapting to that answer.  We also know, from experience and research, that creating sacred is healthy for us and one in which we are wise to be engaged.  We may seek the experience in many ways and view it through different lenses but what we are doing for our brains is very similar.  Even if it is just a conscious decision to take time out, or to honour life, or to create something more, we allow our minds, our brains, to experience a sense of eternity.  Perhaps in some way we enter into and communicate with whatever is behind, or weaves in and out of, or is, at least at this stage, an invisible and integral part of the reality of the temporal and spatially defined world we know.


[i] Educators have also noted the role tension plays in hindering learning.  I have recently heard of research being conducted which attempts to assess the benefits of meditation and involvement in the arts in this context.
[ii] Science still has difficulty it seems in addressing the human experience of 'the now' in their space-time theories.  Mermin offers OBism as a way of putting the scientist-observer and human experience back into science. Lipton uses quantum physics and his experience as a biologist researching how cell membranes react to the environment to control cellular life, including changing the DNA, to postulate energy, or 'spirit', involvement.
Contents page
Posted by http://forloveofgaia.blogspot.com.au/ at 23:15