'Are you gunna be banging them drums again?': healing, spirituality and the space between 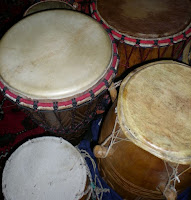 Recently I read The Eye of the Reindeer by Eva Winter.  One of the many themes woven through the work is a search for a sacred Sami drum.  The drum was believed to have been hidden by an old Shaman to protect it from being taken away and destroyed by missionaries.  The fictional story touches on a number of issues in relation to sacred beliefs and practices of indigenous people and the drum’s role in healing.  It also brought to mind another book I had read years ago, The Healing Drum: African Wisdom Teaching by Yaya Diallo and Mitchell Hall which is the story of Diallo’s early life in Mali.

Although The Eye of the Reindeer is set in the early twentieth century there are echoes of attitudes still held today. Some are behind comments I have received during the time I have been involved in West African-style drumming and dance, rare though they may be.  One I have used as the title of this blog, ‘Are you gunna be banging them drums again?’.[i]   Others are evident in the times the police have been called to shut us down when we have performed at functions because of noise complaints from the locals.
Comments like these reduce percussion rhythm and drum music to ‘noise’.[ii]    I’m not sure if other bands or orchestras would suffer from the same fate.  Would kit drumming be more acceptable?  Judging by one of the current advertisements on TV, I guess not.  So is there some sort of cultural elitism at work, or is there something about percussion and drumming which challenges us on another level?

When performance, ritual, writing, art, and meditation ‘work’ they draw us in. When we engage fully with the work or event we are lifted out of ourselves and have a sense of becoming one with it.  We are happy to be drawn along the evolving journey.  Even performers and artists can feel themselves being drawn along for the ride when a work ‘works’ and takes on a life of its own.  It is no longer ‘us’, ‘them’, and the work.  The work and us exist together somewhere in the middle, in ‘the space between’.

Neuro-scientists suggest we go somewhere else in our brains.   It is our brains which allow or inhibit and our brains are constrained by our experiences and knowledge. So if we are familiar with the style or content of the ritual/performance/artwork our brains are quite happy to engage and do not fear the outcome.  However, if we are unfamiliar it is often much harder to let go and follow the flow.  In some circumstances this reluctance keeps us safe but at other times it can stop us being part of situations that could be a lot of fun and give us something special in return.

Scientists are also researching the potential benefit that rhythm, music, meditation, ritual and artistic practice have on our wellbeing[iii]:  something that practitioners have believed and experienced forever.  In The Healing Drum, Diallo and Hall write, ‘In the Minianka villages of Fienso and Zangasso, the musicians were healers, the healers musicians.  The word musician itself implies the role of healer.  From the Minianka perspective, it is inconceivable that the responsibilities for making music and restoring health should be separate, as they are in the west.

In the Miniankan view and practice of music, harmony is the central concept...interaction of parts in a whole.  The encompassing whole...is the Minianka cosmos...visible and invisible.  The entire  Mianianka village social structure and culture seek to sustain the lives of the people in harmony with one another, the Creator, the ancestors, the spirits of the bush, and nature....This is the cosmos in which Minianka musicians play their instruments and heal.’

I would extend this potential to all artistic and spiritual practice.  So do we fear that by being part of particular forms of art and music our own ‘selves’ and beliefs may be challenged and we will be ‘corrupted’?

What also interests me is that we so-called ‘educated elite’ do not believe what we are told by traditional practitioners, or think we experience, until it has been pinpointed, tested and enough evidence found to validate it, and even then only by a percentage probability.  Yet research is also showing in relation to the placebo effect, that if we believe something will work it is possible to be halfway there, if not all the way.  So if we let go our disbelief and engage, our brains may well readjust and allow healing to take place, even if, as Chanda & Levitin suggest, there may be multiple, including social, factors at work.

The other enticing concept is reflected in Dan Seigel’s and Sir Arthur Stanley Eddington’s[iv] writing on the mind and consciousness.  Seigel views the mind as the seat of consciousness, which he positions beyond our physical selves.[v]  It is a self-organising system which links, integrates and ‘regulates energy and information flow within and among us’.  Eddington’s seat of consciousness seems to be an undetermined place and system through which the world interacts and transmits messages, and is continuous with our conscious and/or subconscious mind.  Both position this system somewhere in a type of ‘space between’.   It sounds to me a bit like concepts of a ‘cosmic god’ and similar theological explorations of the nature of 'god'.  Lipton, on the other hand, extends the 'mind' and consciousness to cell membranes which react to the environment (energy, 'spirit') and are responsible for controlling cell function, including changes to DNA. [vi]
Be that as it may, there are parallels to the potential for art, including drumming and ritual, to take us, our brains or our minds, to a similar place.  What I am hedging around here is a concept of ‘spirituality’, and the potential link between art and spirituality.  It does not mean that if we engage in art practice we will lose our particular religious or spiritual bent, if that is what we are afraid of.  It is more likely that our beliefs and experiences will influence our response to the work and our use of the medium.  It is also possible that our unconscious and subconscious selves go to all sorts of places we cannot control anyway, especially if it is through these ‘selves’ that we communicate with the rest of the material and immaterial world and cosmos.

When we open ourselves to, and are challenged by, the variety of art forms available to us, including from cultures not our own, and unfamiliar modes of expression, we can partake at any level we wish as well as enjoy the spiritual and healing benefits which historically have been part of them.

[i] In my and our audiences’ defence, positive responses like, ‘that was fantastic’, do outweigh the negative.
[ii] Anyone who has learned African-style drumming is aware that there are many layers of rhythm in each piece, all with high and low sounds, traditionally with voice and other instruments, so creating melodies which speak to each other in an integrated whole.
[iii] Among the exponentially expanding writing on these topics are: Anastasi & Newberg, ‘A Preliminary Study of the Acute Effects of Religious Ritual on Anxiety’; Bensimon et al. ‘Drumming Through Trauma...’, Chanda & Levitin, ‘The Neurochemistry of Music’;  Cossins, ‘A Brain for Rhythm’;  Davidson & Lutz, ‘Buddha’s Brain: Neuroplasticity and Meditation’;  Doidge, The Brain’s Way of Healing;  Chapter 8; Halpern, ‘Brain Entrainment’;  Harvey, ‘Healing Rhythm’ in Mindfood;  Maxfield, ‘Brainwave Entrainment to External Rhythmic Stimuli...’;  Moss et. al., ‘Effects of an 8-Week Meditation Program on Mood and Anxiety in Patients with Memory Loss’ and the work of Andrew Newberg.
[iv] Seigel is a professor of psychiatry and Eddington was an astronomer, physicist, mathematician and philosopher.
[v] https://qz.com/866352/scientists-say-your-mind-isnt-confined-to-your-brain-or-even-your-body/
[vi] Bruce H. Lipton, The Biology of Belief

Contents page
Posted by http://forloveofgaia.blogspot.com.au/ at 15:05