The Fire of the Sun: summer, festivals and Australia

For a number of years I have viewed these events as misplaced in Australia, as none are indigenous.  That is, none have emerged from, relate to, or express a culture and spirituality relevant to the land we call Australia or its cycle of seasonal change.  Rather, the dating of these events is set by the calendar and the content influenced by north European and American tradition.

I have also, from time to time, been motivated to invent alternatives which attempt to address this anomaly.  One of these being The Fire of the Sun: a performed event expressed in video, of an internal, intellectual historical and spiritual exploration around the theme of summer.  More recently I’ve been rethinking what, in fact, the popularity and persistence of the festivities could be expressing about us; what their significance might be.  We are all, in any case, mistresses and masters of invention, and we love creating ‘significance’, and I believe that values and ideals are integral to this process.

City life does a good job of shielding us from seasonal cycles.  All, or almost all, varieties of foodstuffs are available all year round.  We protect ourselves from most extreme weather with air conditioners, heaters, fans and storm-proof buildings.  We block our minds from the world outside, absorbed by our mobiles, ipads and notebooks.  So why should I...we...wonder that our festivals do the same:  that they ignore the land and season in which they are set?

For many years the first celebration of the festive season was Carols by Candlelight followed by Christmas/Xmas Day and then New Year’s Eve.  More recently the Summer Solstice and Chinese New Year have been added to the Australian mix.  The following discussion around these events is, to quote, ‘in no particular order’.

Christmas Day is the date selected by the christian church to mark and celebrate the birth of Jesus of Nazareth.(*1)  Part of Jesus’ story is one of caring for and encouraging the poor and dispossessed, of working for peace, and of functioning as a co-operative community which shares resources and wealth.  Christian church rituals mark the importance of the occasion in different ways.  Some use special colours, candles, incense, song, music, gesture, poetry (psalms), prayer, movement and a focal setting of the baby Jesus or a creche.  Others reject all forms of outward show.

For non-believers the day is designated Xmas.  It is marked, not by a formal church ritual, but by informal gatherings of families and friends, usually around a meal where copious amounts of food and drink are consumed, gifts are exchanged, and a good time is had by all, family disputes aside.  In spite of the associated commercialism around this time, our celebration of Xmas seems to signify that we do believe families and friends are important and need to be nurtured;  supporting the Christian ideal that a co-operative community is a better way to live than isolated individualism.

The gift-giving, food and drink can be interpreted as symbols of the ideal of sharing resources and wealth.  The laughter and relaxed conversation can be examples of peace-making, temporary though they may be.  Discussion around politics and religion, which tend to be divisive, are usually tabu, but not in the sacred sense.

Households also mark the day with special colours, decorations, costumes, candles, incense, and maybe also singing, music and dance.  The trappings and symbols of Xmas are also infiltrating other parts the world, as the commercial value of doing so is recognised.  Xmas is becoming global.  In contrast to many church rituals most of these family events are high energy and secular in nature, with limited reference to an ‘other’, or ‘god’.

Preceding Christmas/Xmas is Carols by Candlelight.  My reading of this event is that it has gradually blended the sacred and the secular.  Whether we and our families believe or not it is possible to feel comfortable participating in this event, be inspired by its performances, and join in the carols.  The overriding theme, ‘peace on earth and goodwill to all’, is a relevant ideal for believers and non.

The commentators in the televised commercial versions have referred to values and ideals such as peace, harmony, co-operation, community, and sharing.  The timing of the event for the evening and the candles that are held create ‘magic’, that is, something beyond the everyday (although in future this may be superseded by mobile phone lights and apps).  The event may have been taken over by large corporations and television networks promotional needs, yet the sense of magic, mystery and goodwill remains.

Also preceding Christmas/Xmas is the solstice.  In Australia it is the summer solstice and our longest day: the time when the tilt of the planet allows for direct access for the sun's rays.  Many today acknowledge this event with ritual and celebration - remembering and perhaps reinventing old European tradition when the summer solstice was celebrated with fire.   This is an apt concept for Australia as here it is the time when all those who live near or in the bush have their strategies in place ready for the impending fire season. The summer solstice also marks the time after which we begin our slow withdrawal from the sun direct rays and experience its diminishing influence.

As it takes a while for the effects of this withdrawal to impact on our part of the planet our experience of summer remains heat and high energy for a number of months.  It is also the long break from school and university, and the time when everyone is outside and enjoying what our country and culture has to offer.

Then there is New Year’s Eve; the night of fire-works.  New Year’s Eve celebrations are now global.  Advances in technology and communication mean that the major cities in most countries on our planet are able to participate in an extended celebration which follows the moment of temporal change as the earth spins on its axis.  While many cultures’ indigenous traditional new year celebrations are not yet lost, the addition of the calendar New Year is a celebration of our global community:  one during which all differences are momentarily set aside as we co-operate for the same purpose.

This simultaneity presents an opportunity for individuals and groups all over the world to move further towards the ideal of ‘global community’; beyond race, religion and difference.  In my view, that is something worth celebrating in spite of associated commercialism and corporate manipulation.  It is, after all, our individual choice how much we engage in the excesses.

More recently the Chinese Lunar New Year celebrations and parade have been added to the mix.  Although culturally specific it is quite a fitting end and farewell to the summer festivities.  It too is becoming a global event, accompanying Chinese migration and business interests.

The high energy celebrations of Xmas, New Year and Chinese New Year are well placed in the season of summer, with the summer solstice, Carols by Candlelight and Christ-mas day celebrations offering space and time for reflection.  In Australian we have taken these disparate events on board and created a continuum which has ended up being a wonderful celebration of the natural season in which they are placed: summer.(*2, *3) 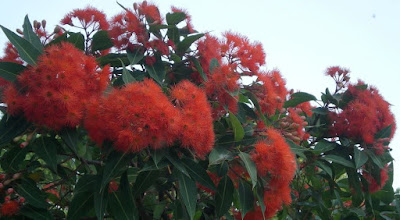 I am intrigued by reading about the Afro-American diaspora festival of Kwanzaa from 26 December to 1 January; devised as an alternative to the commercialism of Xmas.  Supposedly it has taken African symbols (such as crops, mat, multi-candle holder, corn/maize, gifts, unity cup and seven candles) and values and associated ideals (including collective labour, self-actualization,  self-determination, cooperative economics, ancestry, creativity, faith, commitment of parents to children) and worked them into contemporary American life.

In spite of the danger that I may have misunderstood and misinterpreted Kwanzaa, I have been inspired by the concept.  Our festivals also have the potential to be reinterpreted to signify deeper values and ideals. Those I have mentioned previously include peace, harmony, community and sharing of resources.  If it is not overly stretching we may also include,

Giving deeper meanings to our actions, our hopes and our ideals is what humans have done for centuries.  Whether we consciously continue to do this today is in some ways irrelevant. The fact is that we view celebratory events such as these as important enough to continue to engage in and extend them.  That speaks volumes.

*1.  Some orthodox churches celebrate Christmas on 7th January and New Year on 14th January, depending which versions of the Gregorian or Julian calendars they are following.

*2.  Tu B'Shavut (Abor Day or New Year For Trees that bear fruit and nuts) is also celebrated by some members of the Jewish community on 25 January.  This fits well into this season when we are enjoying the sweet summer fruits.

*3. The only day I have not included during this period is the 26th January, the date officially designated as Australia Day.  I have not included it as I remain conflicted about a day which marks the beginning of British conquest of the land and the colonisation, slavery and murder of the original inhabitants, being promoted as a day to celebrate 'being Australian’.   Yabun, a celebration of Aboriginal and Torres Strait Islander culture on the same day, the smoking ceremonies that have recently been introduced around the harbour and the Vigil the night before, counters this somewhat.  I have written more on this, Australia Day: conflicts and alternatives

2016 Postscript.  While clearing the last of my fathers papers recently I came across an email describing one of his Xmases in the POW camps.  I have uploaded it on Wordpress - 'Rusty' Rups' Xmas in the Camps 1942-1944
Contents page