The Trickster on a tightrope: on being 'in between', autumn and time for reflection

Contents page
I’ve been reading a couple of seemingly unrelated books recently.  One is Paul Ehrich and Robert Ornstein’s Humanity on a Tightrope, the second is Mythical Trickster Figures, edited by William Hynes and William G. Doty, the third is The Brain That Changes Itself by Norman Doidge, and the fourth is Doidge’s sequel, The Brain’s Way of Healing.  In spite of their differences a number of common themes have emerged.

One is how precarious, fragile and interrelated it all is.  Whether we are talking about the state of the world or the natural environment, or the health of our bodies and minds, there is a delicate balance which must be maintained for us to continue as individuals as well as a global community.  Even when everything seems to be calm, ‘together’, and progressing on an even keel, behind the scenes is an enormous amount of continuous activity, sometimes frantic activity, of networking, repairing damage, filling gaps, offering alternatives, making friends, attacking enemies, discarding rubbish, maybe even recycling, creating replacements...whew...exhausting just to think about it...oops...that’s just engaged another set of neurons and chemical reactions!

What I enjoy about the trickster figure is that it also symbolizes our humanity and vulnerability.* Yet while seemingly part of this conglomerate organic world the trickster does not follow the expected rules or mores.  Instead the trickster upsets things.  The trickster opens doors that society says should not be opened and asks questions that society would rather not consider, especially ‘why not?’  By doing this the trickster also reminds us that all is not as it seems on the surface, that there are many alternative choices and pathways that can be taken, and we can ,if we dare, go against the norm.  These choices may end in disaster, not only for ourselves but for those near us.  On the other hand they may also lead to exciting insights, unexpected opportunities and new truths.

Whereas the Trickster does not seem to reflect before taking action, we are challenged by the Trickster’s actions and the results of those actions to reassess our own biases and assumptions about life.  Erlich’s and Ornstein’s book challenges us to reflect on the direction we are taking with the choices we are making as a global community.  Their main focus is for people to take the time to listen to, and develop empathy for, the natural world and each other.  Doidge’s work addresses, among other things, the human brain’s need for reflection so that regeneration can occur, and to calm down the ‘overdrive’.

In Australia autumn has finally arrived after a very long summer.  Autumn is the in between season and in one sense can also be viewed as the season on the tightrope teetering between summer at one end and winter at the other.  We know where it is going, or we’re pretty certain, and that winter is next on the agenda.  On the other hand we will never be sure where the Trickster will end up:  whether he/she will fall, remain balanced, go forward or backwards, or have thought of some impossible alternative. So too when the figure on the tightrope is used as a metaphor for the human world and the environment, as in Erlich's and Ornstein's book.  We have no way of knowing the outcome in these contexts either.  What we do know is we have choices - for ourselves, our world and in relation to others - and in order to make informed choices and for our own health, we need time to assess and time for reflection.  Perfect for Autumn. 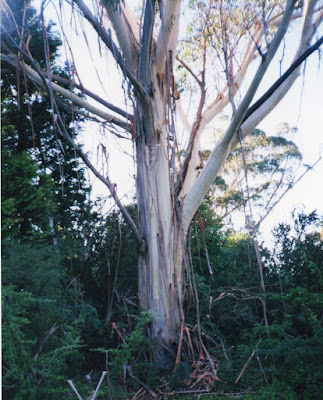 AUTUMN
A time of assessment,
of visiting ancestors
and ghosts of the past,
of gathering in,
sorting,
letting go,
and a time of preparing for long nights ahead

*Note.  It also reminds me of the vital roles performing artists, visual artists and writers can play in society when they and their work function in the same way as the trickster.
Contents page